Why would they ever love losing their Wealth as a result of LVT ?
Here’s our proposition: We've decided that wrapping up all of the current taxes on property -- Council Tax, Stamp Duty, IHT, ga-ga Granny Tax, Housing Benefit etc. -- and  transform them into LVT. But how on earth are the politicians going to sell that idea to the 60% of the population who are owner-occupiers and their families? Think of the reactions:

"Watch the price of your house drop to one-third of its present value."

"Be forced to pay tax even if you don't earn a penny."

"Pay the State for something you thought you owned outright, or have the very land under your house nationalised, just like they did in Soviet Russia."


How about explaining to them all the future benefits?
– So you’ve lost your comforting ever-inflating equity, created by the increase in the value of your home (less whatever you still owe on  to the mortgage.) But look at all the benefits you’ll reap (sometime in the future
1.      Pay less to own your house over your lifetime of home-owning. (probably, but maybe not by much)
2.      Pay much, far less in the early years. (Although still paying something in later life)
Conventional house-buying with a mortgage means huge up-front payments, usually at a time where income is low but rising, commitments to family cause surprising if pleasant surprises! The mortgage payments very gradually subside so that as retirement beckons maybe to zero.
3.       Instead of all that Mortgage interest going into the banks, it now goes to taxman, so lower taxes, especially on income are feasible.
4.      The real but intangible value of being classed a ‘home-owner’ will continue. Best of all it will become easier for your children to accede to this state, to become part of ‘the great home-owning democracy’.
5.      Remember there is no more Stamp Duty to pay, Council Tax is also covered. That bugbear of the middle classes, Inheritance Tax is no more.
6.      When you go ga-ga and they cart you off to a home, the state will pay. Never again will your children see their inheritance wiped out to pay for your dribbling incontinence. (But that’s no big deal because there is no inheritance. LVT has wiped it out?)

NOW TELL ME MR. & MRS. HOMEOWNER, WHAT’S NOT TO LIKE ABOUT THAT?
Did I mention, no Capital Gains? Your house would actually be worth less when you come to sell. After all it is second-hand, and has depreciated a bit.
Oh dear! This is a dilemma. So the choice is (a) build up a tidy capital amount to leave the children when I die, or (b) make it much easier for them to get on the property ladder now?
[Note? The capital value you accumulate in today’s market can be used by yourself, dear homeowner. Equity withdrawal is one way (hint: it’s a bit of a swindle) or you could downsize in later life and have the life of Riley in old age. Surprisingly few trade-down, despite this being the only way live homeowners can get real money into their hands]
Don’t be surprised when today’s Home-owners all speak as one “We will never vote for any politician who even suggests we investigate LVT. Our mouthpieces, newspapers like the Daily Mail must alert us to the faintest whiff of such dangerous talk.”

Think I’m making this up? Look at my previous postings about The Garden Tax, ( http://housescheaperbettermore.blogspot.com/2017/06/)  and Poor George (http://housescheaperbettermore.blogspot.com/2019/07/poor-george-he-discovers-that-some-of.html), the sad case of Monbiot who wrote a very moderate and well-reasoned case for LVT.

POLITICIANS DREAD FALLING HOUSE PRICES
‘Affordable housing’ ‘Help-to-Buy’ — these are just some of the ways politicians pretend to tackle the housing crisis. They know that there is a crisis — too few homes available to buy, and the price of houses spiralling beyond the reach of many hard-working, just-about-managing families.
The one obvious political solution to the crisis would be to engineer a crash in the housing market. What happened in 1988-97 would do nicely! Instead of the average house costing FIVE times average earnings (1990) it dropped to a much more ‘affordable’ THREE times earnings.
Of course the 1990s were a time of woe for home-owners. Repossessions soared. No politician wants to held to blame like the hapless John Major, especially after the debacle of ‘Black Wednesday’ in 1992 (when the UK was ejected from the European Exchange Rate Mechanism). All through this time the price of houses fell. The average house price was at a peak of £140,000 in 1988 and then it dropped to about £90,000 by 1996, a 40% drop. (At lot of this drop in real prices was masked by steep rates of inflation.)
So did this put people off buying houses? Was this the end of the dream for the ‘Great Home-Owning Democracy’? Not really, if you look at the picture: 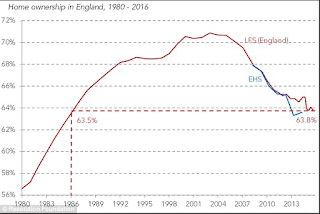 There was a slight dip in the percentage of owner-occupiers, with and without a mortgage. A mini-peak of 68½ % was reached in 1994 and flat-lined for about three years. After 1997 ‘things could only get better’ under Prime Minister Blair, and ownership advanced again. The Great Home-owning Democracy topped out at 71% in 2003.  Since then, despite the efforts of the politicians (or because of them?) things have got a lot worse. House prices are now more than double what they were in 1997. They have doubled in terms of earnings too.
Ownership is becoming less possible especially for the younger, first time buyers. Now it’s not 71% that are owners, currently less than 64% own the home they live in. Or back to 1986 as the dotted line on the chart shows.
This is a cluster of policy failures which surely means that any politician wanting to be re-elected would need to fix it. The solution seems so obvious — we need a period of falling house prices. Great hopes and expectations were raised after the Great Financial Crash in 2008. Now at last we would see HPC — the housing price crash. The website www.housepricecrash.co.uk attracted huge attention. And yes, for a while the market stuttered. But then Gordon Brown “saved the world” (he meant to say ‘the banks’). Chancellor Darling introduced Quantitative Easing, which stuffed the banks with lots of money to lend. The result? House prices started rising again. Ownership rates carried on declining.
House prices resume their inexorable rise, this time with ultra-low interest rates
They knew that this was exactly what would happen, and yet the politicians, Brown, and Cameron after him, allowed it to happen! Where was the statesmanship from the leaders who would Do The Right Thing and let house prices crash?
According to Keohane & Broughton [1] in The politics of Housing
“The problem is the extent of the asset bubble that’s been created around land in the UK and particularly in the South of England is such that it cannot easily or quickly be unwound – so much of it is linked to the health of our banks, and to individual's long term financial security. There is no way of addressing this problem in the short run – housing officials and ministers are operating within almost impossible constraints, which pushes them into short termism. It’s easier to announce another package of 'help for hard pressed homebuyers' than to seriously address chronic issues of undersupply and affordability. They can’t deal with the long term strategic stuff”.

K&B tell us that there are 3 factors to bear in mind
1.     Is housing a pressing problem? Do we really want to fix it?
2.     What are the voters’ aspirations and financial interests?
3.     Ideology of the Parties? All capitalists now.

Judging by the half-baked ideas coming out about the ‘need to build more house’ and such gimmicks as ‘help to buy’, the politicians clearly don’t want to fix it. But won’t the voters punish these reckless politicians for their fecklessness?
Not the existing home-owners. They are still a comfortable two-thirds majority of the people, and these are people that vote, mostly for the Tories. They value their ‘hard-earned’ build-up of equity in the value of their house. (In truth it is unearned capital gain!) But woe betide any Chancellor who would deprive the owners of their anticipated pension fund.
But the non-owners join in this self-enriching dream. Even though the prospect of becoming a home-owner is receding for many, they still rather like the ‘free lunch’ of rising prices. Again one effect of QE is to keep interest rates at rock bottom. This appears to make the cost of buying a lot more affordable.
In ideological terms there is little that sets the parties apart. All, even Corbynistas, pay lip-service to the home-owning democracy. It has been a wonderful ride. Property owning has expanded from being the privilege of the very few — about 10% were home- or property-owners in 1910. To get this up to 70% is a real and I think highly desirable policy goal.
At some point the balance will tip, and falling house prices will become the only solution. But for now the owners think that ever-rising house prices will go on for ever, and no politician could get elected disabusing them of their money-for-nothing fantasy.
Reference  Keohane, Nigel and Nida Broughton (2013) The politics of Housing Social Market Foundation.

Keohane and Broughton suggest that the best thing to do is to promote the rental sector. Once a critical mass of renters builds up, then the power of the owner-occupiers’ lobby is weakened. No, not really, because many renters aspire to be home-owners too. The Chancellor (Osborne) has not helped either by penalising buy-to-let. Pressure is building to give tenants security of tenure. A very good thing too, but it does make BTL less attractive. You can’t have rented accommodation without landlords. It comes to something when Tories crack down on landlords (but how many votes do they have?)

The only hope for LVT Because of the home-owners’ power as a resolute majority of voters LVT will NEVER happen unless extreme caution is exercised. I’ve suggested one small step, the conversion of a greatly-hated tax, namely Stamp Duty into a small lvt, letting it settle in for a few (ten?) years, and then widening the scope of LVT. Even for this baby step some form of sweetener is advisable.
We are forced to use the standard mendacious language perfected by Cummings (and earlier used by the Thatcherites). “No extra taxes” “Your home is safe with us”. Never admit your final goal of 100%LVT. That only hands your opponents the free pass to say “Abolish the hated Garden Tax (LVT)”