THE POLITICS OF HOUSING A report from the National Housing Federation NHF By Keohane & Broughton, published in  2013

Now this should be useful! And it starts well:

“The affordability problem dominates England’s housing market: an increasing proportion of disposable household income being consumed by housing costs; difficulties for younger generations seeking to access the housing ladder, despite aspirations and expectations to do so; and, very long waiting lists for social housing.

Brilliant! They get it. Houses are too expensive. Prices must fall.
But then they go and spoil it all by falling for the conventional economic ‘wisdom’

“The fundamental cause of the long-term affordability problem is the effect of supply constraints in the context of growing household demand.”

Oh dear. The authors Keohane & Broughton (K&B) work for the SMF --- Social Market Foundation, a left-leaning think-tank. The NHF who paid for the Report represent Housing Associations, who are the only producers of Social Housing these days. So these are the good guys, and their intentions are honourable.
The Report is also a treasure trove of facts and figures, as well as historical analysis of Housing both privately-owned and publicly provided in Britain since 1918. For example:

How big a political issue has Housing been over the years? How much attention have politicians given to the Quality of Housing (slum clearance), or the Quantity of Housing, especially Social (once called Council) Housing? And how much effort have politicians devoted to keeping Prices down (or subsidising buyers)? 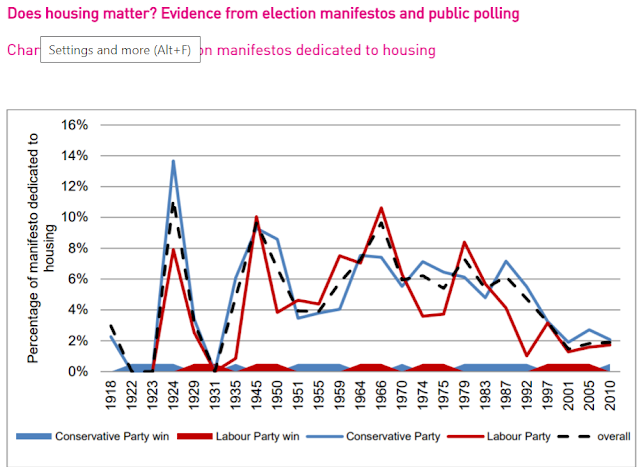 ‘Housing’ as an issue has now dropped off the scale. The last time it was a major issue was during the bidding wars of 1950s/60s with promises to build 2, 3 or 4 hundred thousand new council houses. Before that post-World Wars promises got the politicos enthusiastic.

What does motivate politicos to action? K&B suggest
--Problems which are visible of a kind they think they can fix.
--Voters’ interests and aspirations
--Politicians’ own economic and other ideology. Free market now endorsed by all, so private good, anything public has to be erased, diminished, degraded.

What makes politicos lose interest in acting on the housing market?
--Visible problem fixed. Slums cleared, overcrowding ok, no need for vast newbuild programme
--Anything longterm, so future housing needs can be ignored for now.
--Anything harmful to the majority of voters who are owner-occupiers
--Anything which blunts the aspiration of the 86% who wish to become home-owners.
(So falling house prices, loss of capital appreciation, never do anything which harms that)

THE DOOMLOOP OF OWNER-OCCUPIED HOUSING:
WHY HOUSEPRICES DRIVEN UPWARD
Wonderful graphic which means to show why supply fails, but actually shows how prices always rise 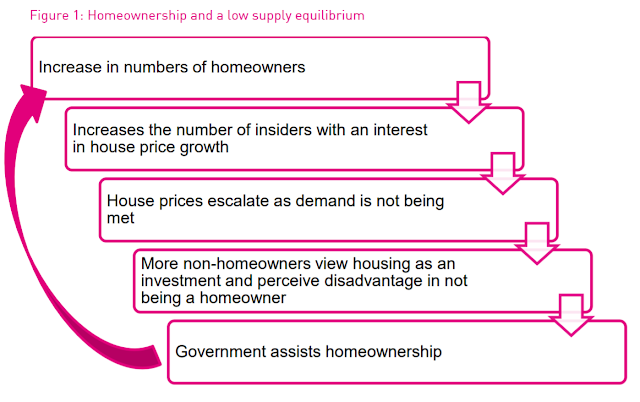 Home-owners are ‘insiders’ in economic jargon, and have the power to keep outsiders (non-owners) priced out, and prevent new developments. ‘Help-to-buy’ and other demand-side supports makes it worse.


What are government doing to increase supply (the economists’ fallacious fix)?  K&B point to pressure put on local and regional authorities to build more and cut red tape on planning delays.

K&B conclude inanely that the best that can be done is
1.       Make alternatives to owner-occupier status more attractive, and hence
2.       Reduce the number of insider-voter owner-occupiers.

Other highlights of the Report

on p42 Government has deliberately planned to snatch equity in order to pay for Social Care for OAPs. (This is absolutely true. I’ve heard civil servants say so at a conference)

on p45 Surveys show that asset appreciation is the MAIN motivating factor in the aspiration to buy, and of existing home-buyers.

The Report can be downloaded from
https://www.smf.co.uk/publications/the-politics-of-housing/