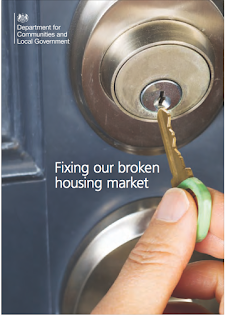 Supply and demand. You can’t buck the market. So increasing supply is always a good way to hold down prices in the market, isn’t it?

So why won’t the call to “build more houses”, even if heeded, result in more affordable homes? Because the housing market is not normal. It needs fixing, but Government has no real intention of bringing down house-prices. So saying ‘building more homes will fix it’ is a just a way of distracting attention away from the real solution.

That seems to be the idea behind the latest Government Paper on Fixing Our Broken Housing Market[1]. You won’t be surprised to learn that they claim that building lots more houses should fix it.


Of course Government should not be blamed for this shortfall! Here’s how they explain it:

“The problem [of under-supply] is threefold:
not enough local authorities planning for the homes they need;             house building that is simply too slow; and             a construction industry that is too reliant on a small number of big players." (p9)

So it’s other people, not the government are not doing enough! Totally ignored in this Report is the idea that maybe government’s own legislation might be a cause, or that the way tax is inflicted on the housing market, or that bailing out of the banks so they have virtually unlimited funds for mortgages may have had something to do with this latest house price bubble.

So how can I be so sure that increasing the supply of houses by building lots more won’t bring down prices?

Perhaps the recent experience in Spain and Ireland should make us sceptical. House-building booms in both of these countries prior to the 2008 Crash didn’t bring down prices. Instead they finished up with ‘ghost estates’ of half-built stock strewn across the countryside.

But sometimes, if the market conditions are right, then the builders can produce the supply that will bring prices down. That is what happened right here in Britain, in the 1930s, when huge numbers of semi-detached houses were built in the suburbs.

In the years 1933-1939 the British builders managed to construct more than 250,000 houses each year[2]. Amazingly, the price of these houses dropped year-on-year. Land to build on was ‘created’ by new transport systems like the Tube. Planning control was negligible. Labour was plentiful. Interest rates on mortgages were low. It worked because "new marginal land [was] abundant."[6]

The number of houses that today’s builders produce is pathetic compared to 1930s building soom. Last year only 160,000 new houses[3] of all types were completed. That added a mere half of a percent (0.5%) to the housing stock.

If we really wanted to bring prices down, then doubling the current new-build rate would make little difference. If we aimed to match the success of the builders in the 1930s then we’d need to see up to a million new houses built every year for the next ten years. That’s five times the current output.
And even if today’s spec house-builders could manage such huge numbers, what sort of houses would they build? More of the same, most likely.

The result would be millions of pokey little houses crammed onto tiny plots. The UK builds the smallest sized homes in Europe, smaller even than Japan[4]. The quality of the houses being built leaves much to be desired as well[5].
What is making our present-day housing market malfunction? What makes the housing market so different to other markets which mostly do a very good job of supplying us with good quality products at prices we can afford?

The core problem is that housing has become less of a useful product, more of an investment commodity. As well as a place to live, the owner-investors want capital gains. Rising house prices deliver the profits to the owner-occupiers. They in turn are delighted to be worth so much more—on paper.
Canny speculators will hold on to their investments so long as the market is rising. There is little incentive to sell your home, even when you might downsize. The result is that fewer second-hand homes come on the market.

Buy-to-let investors have spotted their opportunity, and they too are buying into this seemingly ever-rising housing market.

But this is not an investment in capital goods which will is result in better and cheaper products in the future. No, this investment in housing is all about capturing the paper profits from rising house prices.

Banks and building societies find it safe bet to lend large multiples of salary to house-buyers. This pushes up effective demand from the buyers, which in turn inflates prices.

If governments really wanted to fix the housing market, they should do something to reduce the ‘investment’ incentives, probably through the tax system. This would be a first step towards making housing more like a normal consumer goods market. When that happens then extra supply really would hold down prices.

It is pure political funk that Governments of all colours shy away from disrupting the owner-occupiers greed for unearned wealth. What the politicians cannot admit is that taxing away some of capital gains of today’s home owner-investors must come first, before house prices can come down.

It will take decades to strip out the invest-for-capital-gains motive in the housing market. Eventually we should hope that the decision to buy a home will be a matter of choosing what is right type and size of house that suits you and your family.

While waiting years if not decades for good sense to return to the housing market, perhaps the best thing a responsible, caring government could do is embark on its own housebuilding programme. ‘A million new social houses by 2022’. How about that as a slogan for the election?