THE POLITICS OF THE GARDEN TAX: FAKE NEWS IN THE DAILY MAIL 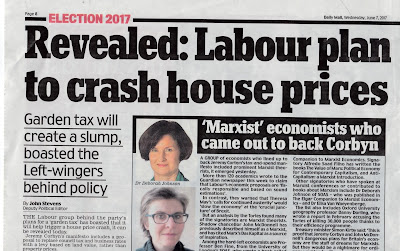 What was getting the Daily Mail in such a tizz?


Could it be this item in the 2017 Labour Party Manifesto?  (on p.86)
“We will initiate a review into reforming council tax and business rates and consider new options such as a land value tax, to ensure local government has sustainable funding for the long term.”[1]

Here’s how the Daily Mail[2] described it:
“Jeremy Corbyn's manifesto includes a proposal to replace council tax and business rates with a levy based on land value, rather than property prices.”

WRONG! ‘Corbyn’ was not proposing LVT, only reviewing it!

And who were the evil ‘Marxists’ behind this vicious Garden Tax?
“The Labour group behind the party’s plans for a ‘garden tax’ has boasted that it will help trigger a house price crash, it can be revealed today.”

That would be the Labour Land Campaign[3], or more specifically a draft paper[4] by Jerry Jones and Carol Wilcox “A strategy for replacing Council Tax and Business Rates with a Land Value Tax: A first step towards a more equitable tax system” from May 2015.

This paper makes a solid and reasonable case for LVT as a replacement for Council Tax. In the welter of philosophical and theoretical diatribes extoling the virtues of LVT, and the vital need for politicians to implement it at once, this paper is a refreshing change.

Jones and Wilcox have worked out numbers. They have tried to anticipate the problems of implementing LVT. They were wise to the effect that LVT would have on the owner-occupiers, and proposed an illustrative rate of ‘only’ 0.85% of the LV.

For other income- or rent-earning properties they suggested a rate of 3% of the LV. Compared to the typical discount rate of 5%, this would not ‘confiscate the rent’ in Henry George’s famous rallying cry, only three-fifths of it.

The next bit of dishonesty from the Daily Mail is blamed on another source:

“The Tories claim the cost of the 3 per cent annual levy for an average home would be £3,837 – more than three times the £1,185 council tax they pay now, based on   the assumption that land value is about 55 per cent of a house price.”

Of course the true figure they should have used for the owner-occupiers would be an LVT of £1087.

On their own figures Jeremy Corbyn's new LVT would be a saving of £98 compared to today’s average Council Tax bill!

Thanks to Corbyn and the Labour Party manifesto, we can get now get a flavour of the nastiness that will be rolled out if LVT is proposed. Let’s be prepared!