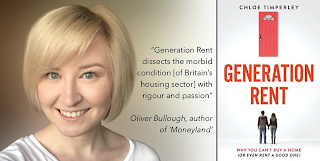 There’s a bright new star writing about the crisis in the housing market, and specifically the lost ‘Generation Rent’. Because of sharply rising house prices far fewer youngsters can afford to buy a house, and are forced to carry on living with their parents or try their luck on the for-rent market. Chloe isn’t just reporting the generally horrid facts about the reality of renting in England today, she has got out there and interviewed many of the ‘players’.

But Chloe doesn’t stop at the ‘point-and-sigh’ stage, she wants to know what is causing the problem, and why. The main cause of the crisis is that prices have been allowed (by politicians) to get completely out of hand, rising to absurd levels. She gives a very good explanation of how we have arrived at this sorry state through the liberalisation of credit and mortgages, pushing up prices. The alternative public rental sector has been starved and shrunken via sale of council houses. Governments respond by Help-to-buy schemes which only make things worse.    Read on

The buy-to-let sector has been massively boosted, making houses to buy less available to youngsters, so buying becomes an even more distant option. Conditions in the rental sector are precarious with legal protections for tenants puny. Landlords can and will evict at short notice for any or no reason. (In my limited experience, not all landlords are so rapacious, but the bad ones tarnish the reputation of them all. Chloe, I think, paints too bleak a picture of landlordism).

Since the main theme of this book is the private rented sector, Chloe makes several recommendations for its improvement, starting with security of tenure. Comparisons with the rented sectors of Germany and Switzerland are revealing. Ownership is not everyone’s dream, renting is a highly attractive and well-regulated alternative.

But improvements to the UK’s private rented sector is not Chloe’s last word. In her final chapter she makes an astonishing and highly welcome plea for the introduction of land value tax. She has read her stuff, particularly Ryan-Collins, Lloyd and Macfarlane’s Rethinking the economics of land and housing. She realises it’s the cost of land which lies at the core of the housing market prices, and that the introduction of LVT should (will?) fix it. She even got around to discussing the idea with one of the authors, Macfarlane.

So she met Laurie Macfarlane and asked

“Could LVT deliver the factory reset our housing market needs?”

His blunt answer was “Probably not. It’s no magic bullet,” he said. “Firstly it would be difficult to bring in…”

This did not make Chloe give up on LVT. She alluded to the suppressed Stern Report of 2004 which recommended LVT, and still seems to hold out the hope that LVT might happen. Already in London more than half of the population are renters. ‘It’s a war out there’ with owners and landlords creaming off wealth at the expense of the rest of society – the renters, Chloe concludes.

Goodness me! Pro-LVT riots on the streets of London and other big cities? Now that really would wake up the politicians.