NEW PAPER FROM MICHAEL HUDSON EXPLAINS HOW BANKS HAVE GIVEN UP THEIR USEFUL ROLE SUPPORTING ENTERPRISE, AND OPTED FOR RENTIER PROFITS ON MORTGAGES

NO WONDER HOUSE PRICES ARE ROCKETING UP! 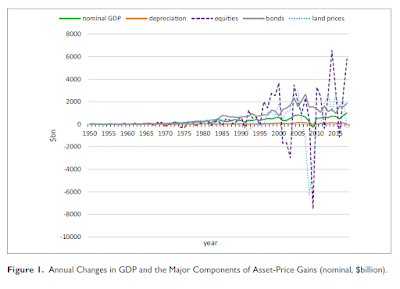 Real estate has risen in price as a result of debt leveraging. The process makes investors,

speculators, and their bankers wealthy but raises the cost of housing (and commercial property)

for new buyers, who are obliged to take on more debt in order to obtain secure housing. That cost

is also passed on to renters, and employers ultimately are obliged to pay their labor force enough

to pay these financialized housing costs.

From North America to Europe, debt deflation has become the distinguishing feature of

corporate income and thereby leaves less to spend on goods and services. The economy’s indebted

90 percent find themselves obliged to pay more and more interest and financial fees. The corporate

sector, and now also the state and local government sector, likewise are obliged to pay a

because they hope to sell their property at some point for a capital gain. Modern finance capitalism

focuses on total returns, defined as current income plus asset-price gains, above all for land

and real estate (figure 1). Inasmuch as a home or other property is worth however much banks

will lend against it, wealth is created primarily by financial means by banks lending a rising proportion

of the value of assets pledged as collateral.

slowing in the United States and Europe, even as stock market and real estate prices are inflated

on credit. The result is a debt-leveraged economy.

Changes in the value of the economy’s land from year to year far exceeds the change in GDP.

Wealth is obtained primarily by asset-price (capital) gains in the valuation of land and real estate,

stocks, bonds, and creditor loans (virtual wealth), not so much by saving income (wages, profits,

and rents). The magnitude of these asset-price gains tends to dwarf profits, rental income, and

wages. The tendency has been to imagine that rising prices for real estate, stocks, and bonds has been

making homeowners richer. But this price rise is fueled by bank credit. A home or other property

of the home’s value since 1945. For US real estate as a whole, debt has come to exceed equity for more than a decade now. Rising real estate prices have made banks and speculators rich, but have left homeowners and commercial real estate debt strapped.

The economy as a whole has suffered. Debt-fueled housing costs in the United States are so

high that if all Americans were given their physical consumer goods for free—their food, clothing

and so forth—they still could not compete with workers in China or most other countries.

That factor is a major reason why the US economy is deindustrializing. Thus, this policy of creating

wealth by financialization undercuts the logic of industrial capitalism.

Can be found at https://thesaker.is/finance-capitalism-versus-industrial-capitalism-the-rentier-resurgence-and-takeover/