FIXING THE SNAG WITH switching SDLT to mini-LVT
Is there a problem? As I’ve said, Stamp Duty is a ‘voluntary’ tax. If you don’t want to pay it, then don’t buy a house or flat. My proposed small LVT replacement will also be ‘voluntary’.

Since the new LVT is a straight replacement for the old Stamp Duty there will be no need for parallel running while bringing it in.

But is that enough, politically? Can we rely on homebuyers forgetting how the old SDLT worked? It was steeply progressive. Cheap houses paid NO Stamp Duty. To buy a mansion in Chelsea cost a huge whack of SDLT. 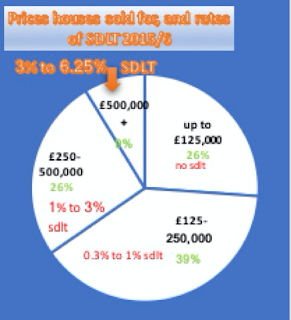 AFTER THE NEW MINI-LVT COMES IN, HOW DO WE KEEP THE PUNTERS (HOME-BUYERS, VOTERS) HAPPY?

1.     Do nothing. It’s new, and it won’t cost them too much — £50 or £100 per year. They will soon forget that strange old beast that used to be called Stamp Duty. This is the cheapest solution, but will the politicians get away with it?

But this might become a political ‘bear trap’ if the rabid right-wing press get hold of it. Imagine the headlines: “Getting rid of Stamp Duty is just the first step towards Garden Tax” (and to be honest, that’s just what I would like to see!), so..

3.     Instead, I would like to draw on two ideas proposed by Tony Vickers[1] for administering LVT and also making it more politically acceptable.

—Use the National Income Tax system: Since SDLT is a national tax[2], payment of LVT could be organised through the national PAYE system. At the time of purchase, when the land value will be established, the new owner has to register the sale with Land Registry. They in turn can notify HMRC of the tax liability. (Obviously in the rare occasions where the purchaser is not already a registered UK income-tax payer, other arrangements will be necessary).
Payment of LVT can then be established through the usual income tax arrangements: LVT might mean no more than an adjustment in allowance arrangements. If there is more than one owner for example, joint ownership by couples, then the liability to pay LVT can be split between them as they wish.

—Allowances: Vickers also suggests that to make LVT politically acceptable in our “home-owning democracy” then a ‘A tax-free element or Homestead Allowance (HA) should apply to owner-occupiers, in recognition of the basic human right to shelter’. This allowance could be set at a rate which ensures that the bottom quarter end up paying nothing.
4.     MY CUNNING PLAN: USE THE NEW LVT TO SNEAK IN BASIC INCOME

I like the idea of allowances but would prefer to use them in a more constructive fashion.

If we were to use an allowance per household, it will be paid whether the house has one, two, three or even no residents. This does nothing to discourage underutilisation.

So my proposal would be for the housing allowance to be paid per full-time resident in the property. In their annual tax return, the owner-taxpayer will need to record the number of residents, including children, normally living in the house on that plot of land. They could easily be identified by NHS or NI (national insurance) number.

The amount of the allowance ought to be the same throughout the country, and should be set at a level such that a single occupant of a modest house has a net liability of zero.

I would calculate this as an allowance of about £55 per person per year Those in even more modest accommodation should receive an income tax cut. Large families living in modest homes could also benefit in this way.

I like the idea of allowances paid out per person and would like to call them ‘Citizens Housing Allowance’ (CHA) which would in effect be an amount paid out to each individual Citizen of whatever age, living at that residence[3].

So owners and residents living in modest homes in less-affluent areas end up paying no LVT, or even receiving a rebate. A nationwide CHA of £55 per citizen would be of some benefit to a similar-sized family living in a ‘cheaper’ London suburb where a house on a £380,000 plot is not uncommon. Their bill for £1,900 would only come down by £220 to £1,680. But for them this is still a lot less than the SDLT of £10,000 or even £20,000 they might have paid.

A Citizen’s Housing Allowance CHA of £55 p.a. for each registered person at that address as an Income Tax deduction which can be used to offset the LVT charge

[1] In his 2015 ALTER paper Real Hope for Homeownership
[2] following various devolution settlements, this really only applies to ENGLAND.
[3] I am deliberately echoing proposals for a Universal Basic Income and I’m using the preferred Citizen’s Income descriptor. Declaration: I’ve been involved with Basic Income since 1983; for more about this see www.citizensincome.org
Posted by housescheaperbettermore at 16:03