No amount of tinkering with the housing market — help-to-buy, build on the Green Belt, more Social Housing—will fix it. Only a really good lasting crash down in the prices of houses will work. Only when we have permanently lower house prices will young people be able to get on ‘the housing ladder’ as it is quaintly called. Only when houses get a lot cheaper will they become ‘affordable’ to use the weasel-words of housing policy wonks and politicians. 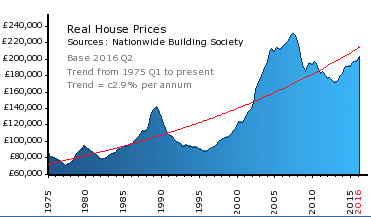 How did John Major’s government fix such the lovely house price crash 1990-96? It was not a pretty sight. Crippling interest rates pushed up repayments. Rising unemployment deprived home-owners of the income to pay the mortgage. ‘Negative Equity’ was the buzzword, as thousands lost their homes, and large amounts of their saved-up deposits and meagre equity. Businesses went bankrupt far and wide. And then there was ‘Black Wednesday’ when the £ fell out of the European Exchange Mechanism.(16 Sept 1992)

So it can be done, but that wasn’t intentional. The inept clowns who produced this misery paid a heavy price—apart from a 2-year interlude (2015-17), the Tories have not won an election since. Politicians of all hues are scarred witless of another house price crash. That’s why when a long-overdue crash was starting nicely in 2008 in the wake of the Great Financial Crash, they moved swiftly. Hundreds of billions of £s of Bank of England money was created (‘Quantitative Easing’ as it’s called to hide its true nature). Interest rates were held at rock-bottom. QE was pumped into commercial banks, the same irresponsible nincompoops who caused the Financial Crash in the first place. The result was, as intended, to set off the asset price bubble. And so the nation’s favourite ‘asset’—houses started to rise in price again.

Even at the time a few of the wiser heads, some even at the Bank of England suggested that if QE was distributed as a small Basic Citizens Dividend, it would revive the real economy of goods and services, and at a fraction of the cost. Boosting asset prices again and again will eventually run out of steam. The next house price crash, which is going to happen anyway, should be managed, not avoided.

Perhaps the house price crash 1990-96 was too sudden, too steep. Prices in real terms dropped by about 40% in those years. The effects were masked by some stiff doses of retail inflation. Much of the pain was caused by high rates of interest. But the result was hugely beneficial—houses became much more affordable again: 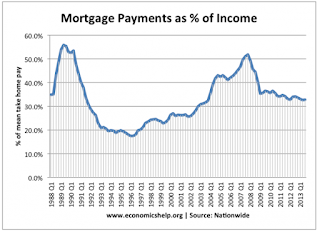 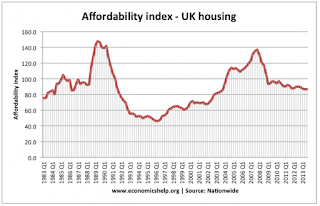 Don’t be fooled by the seeming standstill in ‘Affordability’ post 2010. This is just the effect of artificially ultra-low interest rates. Eventually they will go up, and then the trouble will start!

Instead of addressing the soaring and unaffordable cost of housing head on, the politicians come up with a range of distractions to hope we don’t notice their failure. Using Planning to force housebuilders to produce a proportion of ‘affordable’ homes (so-called Section 106); giving subsidies to buyers in the form of help-to-buy; convening inquiries which suggest that building on the Green Belt is the answer; direct financial help to tenants in the form of Housing Benefit (which costs £23 billion). Anything except the only rational response—planning for and implementing a steady year-on-year drop in the price of housing.

Clearly the rate of drop in the early 1990s was too steep, with prices dropping at about 5 or 6% per year. About half or one-third of that rate of drop would be more manageable, say a 2½% per annum.

But how far should prices drop before a proper balance is struck? Again the experience of the 1990s is instructive. A 40% drop produced a house-price-to-earnings-ratio of 2½. Traditionally this was seen as a sensible affordable target. Take your annual income (both partners added together), multiply by two and a half, and that should be the maximum price you should pay for your home. Now that’s what you would call Prudence! So house prices need to fall by about 50% to bring down the crazy price to earnings ratio to the target 2½.

So house prices must fall at this rate of 2½% for about 20 or 25 years to restore sanity to the housing market. It takes this long because the market has got so wildly out of control, and because we rightly want to restore sanity in a steady, gradual way. This way the burden of adjustment will not be too difficult to cope with—no more wholesale repossessions.

But is there a magic bullet which will gradually squeeze down the price of houses, especially in the most overheated areas, without the terrible collateral damage that raising interest rates causes? Do we have to make people unemployed just to push down house prices?

Of course not! We have the long-available tool of Land Value Taxation which will do the job. Brought in at a low rate, it can then be gradually increased over the twenty year planning period described above. A 50% drop in house prices can be monitored by increasing the LVT rate upwards faster or slower. Actually, I anticipate the LVT scheme will work so well that the electorate might be clamouring for even greater drops in house prices.

Surely any politician would delight in campaigning under the slogan “Houses—better, cheaper and more of them”.