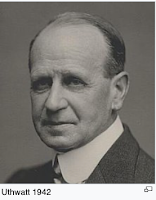 Once upon a time there was a gallant knight from Ballarat by the name of Sir Augustus UTHWATT. And lo! During the dark days of the War against the Nazis did he labour alongside his fellow grandees Sir William Beveridge (born in India) and Lord ‘Rab’ Butler. Later the more proletarian Welshman Aneurin Bevan  joined their deliberations.
Beveridge as we all know laid the foundations for Full Employment and the Welfare State. The second B—Butler introduced free secondary schooling for all (and Grammar schools too). The third B—Bevan is probably best loved and remembered of all, for he is beloved as founder of our wonderful National Health Service. Since 1945 these three great B’s have been revered as founders of the new era of a civilised, caring state that still persists, despite the ravages of time and the forces of evil.

But who nowadays remembers Augustus Uthwatt? It was his Report that inspired the 1947 Town & Country Planning Act (TCPA). It was a conscious effort to improve on the (largely) failed promise at the end of the First World War, that there would be “Homes Fit For Heroes” as Lloyd George promised for the troops when they came back. http://socialhousinghistory.uk/wp/wp-content/uploads/2017/04/Homes_Fit_For_Heroes.pdf

Uthwatt recommended a system of Planning Control and Green Belts together with a tax to reclaim the windfall gains resulting from Planning Permission.
This was duly implemented in the 1947 TCPA. Greenbelts were established around the great cities. Land for building could only be developed when planning permission was granted. Turning agricultural land into building land created a huge uplift in value, so Uthwatt proposed a Betterment Levy (as it was usually called) to reclaim most if not all of the uplift in land values. Proposals to build a number of ‘new towns’ were also mooted, with the agricultural land being compulsorily purchased at agricultural prices.

[It is worth pointing out that this was radical. Nationalising the right to develop—build on— one’s own land was a bold move. Confiscating any profit from the granting of such permission seemed to violate the fundamental rights of property owners.]

As I am sure all readers are aware the system of planning control and permission are still in full force to this day, and are rigorously policed. Woe betide a house builder who allows his roof to be constructed a foot or two above the approval document. Demolition notices will follow.

Green belts, too, persist. Initially they were a reaction to the detested unban sprawl of the 1930s housing boom. The function of the green belts today is debatable, but they have acquired mythic status. Politicians dare not risk the wrath of the middle-class voters, especially home-owners near or within the green belts with housebuilding proposals.

But what has happened to the Betterment Levy and land compensation at agricultural prices for housebuilding? As Liam carefully explains:

Betterment became an architype political football. As governments changed Tory/Labour and back again (1951, 1965, 1970, 1974, 1979), betterment tax was cancelled by Tories, re-introduced by Labour. Eventually the very messy mechanism of S106 agreements became to only form of claw-back by the Local Authority when bestowing the financially highly advantageous gift of Planning Permission on a parcel of land. [sorry, time does not permit explanation of S106 agreements. All I can say is that they are little more than legalised corruption, but seem to work, and are understood as a necessary price to pay.]

One of the other things to go in 1961 was land compensation. No later Labour government tried to reverse this. From this he dates the subsequent rises in plot (land) above the building cost, and from this stems all the crazy upward surge in house prices ever since.

Close examination of the house price chart does indeed show the beginnings of a modest rise after 1961.  Certainly allowing the landowner to retain all (or most, subject to s106 baksheesh) was a necessary condition to allow a land-price upward spiral of house-prices. The other element that was needed was to place purchasing power in the hands of the house-buyers to pay these inflated land-plot prices.

This started in the early 1970s, with the first Tory  (Heath/Barber) financial liberalisation. Up to that point banks were discouraged from mortgage lending, with the mutuals—the Building Societies—the only significant source of mortgage finance. The so-called ‘Dash for Growth’ prompted the first house-price bubble, and inevitably the first post-war banking crash, although this crash was limited to the so-called secondary banks. [Needless to say the banks were rescued by the Bank of England our central bank of last resort. The drop in house prices led to some mortgage defaulting, with re(dis)-possession for the errant ex-home owner.]

Once the finance and banking sector were freed to expand their mortgage loan books, they then supercharged their mortgages via exotic instruments. It has been this easy money that has driven up the prices of the plots (land) that the houses stand on. The banks have been the ‘canary in the mine’ discovering just how much land prices can be inflated through mortgage loans. In general the banks have been prudent, sensibly balancing the risk of default against the vastly enhanced revenues of ever-expanding mortgages.

It wasn’t until 2008 that the market realised that the financial sector as a whole had gone too far, and that they had made too many risky loans which were beginning to default . At that pint the entire banking system was bankrupt, but yet again our money was used to bale them out.

So allowing  landowners to claim most of the uplift from planning let the genie out of the bottle. But even without this change in 1961 the majority of participants in the market continued to enjoy 100% of this uplift. In my previous posting I pointed out that most (80% or so) of the buyers and sellers operate in the second-hand housing market. Financial liberalisation would have created the bubbles and peaks in the housing market anyway.

[This is all a fairly obvious economics result. The 1947 TCPA controls and limits the amount of land for development. This is bound to push up the price of land for building and the plot values under existing houses. ]

Liam would like to reverse the 1961 land compensation law, and reintroduce the betterment levy. This would be doing no more than restoring the Uthwatt idea in full — control over development, especially the amount of development on the one hand, but also to recoup the windfall gains from the lucky winners of the planning process.

Sadly this brave proposal won’t, on its own, work on the practical level, even if it could be legislated for. But as hard experience with betterment levies has shown in the past, it enrages powerful political interest groups. They will pull every available string to prevent it happening, or if it does to repeal it.

Worst of all it ignores the much larger boost given to plot values of existing houses. In large part these values are the product of government liberalisation of the banking system and the unknowable extent to which the bankers themselves will try to create and capture using their exotic derivatives and so on, even more revenue of inflated land values.
Posted by housescheaperbettermore at 23:16