THAT’S EXPLAINS (half) OF WHY HOUSE PRICES ARE ‘REASONABLE’

No, house prices are not a credit-fuelled bubble. Thanks to the long-run in interest rates (and rising incomes) house-prices and rents are actually a bit cheaper than you’d expect.

The source of this amazing conclusion is a Bank of England paper “UK house prices and three decades of decline in the risk‑free real interest rate” by David Miles and Victoria Monro. So this is a credentialed paper from an authoritative source. David Miles is a professor at Imperial and on the BoE ‘expert committee’. This is the credible, logical, rational voice of economic orthodoxy!

Here is the ‘money-shot’. As you can see long-term, real, gilt, risk-free interest rates have been sinking year-on-year in an almost straight line. The authors have great fun mocking the Cassandras whose forecasts of inflation and rising interest rates, especially after bouts of QE have turned out so wrong.

Nobody expected the steady decline of interest rates! 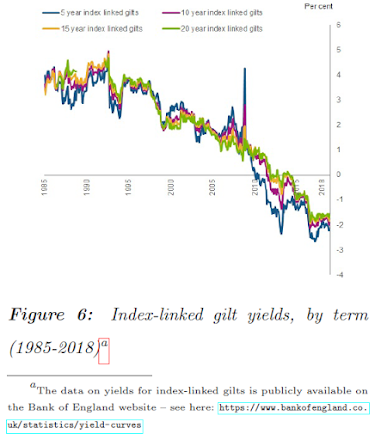 What this means for the housing market

How much you can afford to pay for a house depends on three things according to David Miles’ 1994 model — he is the doyenne of these things.

1. elasticity of supply and demand.

2. changes in real incomes, and

3. user cost—how much it costs to buy and run a home.

Elasticities are fairly stable, so long as market conditions remain much as they are, I’ll deal with the effect of rising real incomes on demand for housing in the next blog.

So User Cost is the main focus here, and of course the main cost of buying a house is the size of the mortgage payments. So Miles and Munro do their sums and reach the following conclusion:—

House prices in the UK have risen +156% in the 33 years from 1985-2019 but just over half of that rise is an illusion. Because of falling interest rates, which have led to cheaper mortgages home-buyers can service much bigger loans. There is of course a sting in the tail.

But the authors (like all the experts before them) expect stable and continuing interest rates. As a consequence house prices will not fall.

This paper is closely argued and fairly easy to follow (until it lapses into algebra). Read it, but pay attention to the rich detail. The Reference for this blog Miles, David ,&  Victoria Monro (Dec 2019)UK house prices and three decades of decline in the risk‑free real interest rate Staff Working Paper No. 837 Bank of England