WE’RE EARNING MORE, SO WE HAVE MORE TO SPEND ON HOUSING

Part 2 of WHY HOUSE PRICES ARE ‘REASONABLE’

The long decline in real rates of interest was used to justify half of the inflation-busting rise and rise of house prices in the UK. That was in the first Part of my commentary on the Bank of England paper “UK house prices and three decades of decline in the risk‑free real interest rate” by David Miles and Victoria Monro.

The other half of the can be explained away because we have become are a lot richer in the last 33 years since 1980s. In technical terms Income Elasticity of Demand for Housing is measured at 1.3. This means that for every extra £100 you earn, you can be expected to spend £130 extra on housing. (This is a generally agreed figure, not controversial).

This gives rise to a curious conclusion: Housing as measured by economists is not a necessity, it is a luxury item!

( Explainer for those a bit rusty on economic theory: When Income elasticities of demand are greater than one, consumers will buy proportionately more of a particular good compared to a percentage change in their income. Consumer discretionary products such as premium cars, boats, and jewellery represent luxury products that tend to be very sensitive to changes in consumer income).

There is no bubble here: How did Miles & Munro reach that conclusion?

So you want somewhere to live? Rent or buy? Let’s assume that, so long as costs are equal you don’t mind which. Here’s the logic used by the authors Miles & Munro of the Bank of England to show there is no bubble.

“…we use a widely used model of the housing market to show that the sharp rise in house values [true] and substantial decline in rental yields [true] can be reconciled with a fundamental equilibrium [in the assumption of house-buyer indifference].

“rational expectation would plausibly have been that average real rents would grow at around the rate of real incomes. How much might reasonable people have expected real rents to grow? Figures show that average rents have been stable relative to incomes.

“…[Thus] house prices would have been expected to grow in line with average future real incomes. [and as you can see from the graph rents have not risen more than incomes] 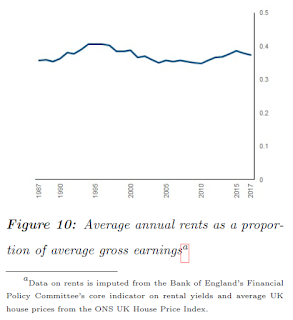 “The conclusions are stark — since 1985, the observed decline in index-linked gilt yields and other changes in the cost of home ownership are associated with an increase in house prices of around 90%; income rises account for about a further rise of 80% - between them these factors account for all of the observed rise.”

SO I’M WASTING MY TIME? Houses are not over-priced. The price of houses does not need to be stabilised or reduced by Squeezing the Banks, Land Value Tax, or even Land Nationalisation. Pushing for change is pointless?

M&M (the authors of this paper) do some sensitivity analysis especially of elasticities and conclude that maybe the price rise need not have been +156% above inflation, it might have been as low as +40%.

M&M make no attempt to explain why TWO of the G7 countries in their study had NO nett house price increase in their 33-year study. Why have Japan and Germany finished up with real houseprices the same today as they were in the 1980s?

THERE’S SOMETHING NOT QUITE RIGHT HERE, but what?